On Monday, July 27th, The Dr. Robert Werner Research & Education Boat, affectionately known and secondarily, named “The Bob”, was commissioned into action at the Skaneateles Country Club where it will be moored via the courtesy of the Club.

Skaneateles Lake Association (SLA) Executive Director, Frank Moses, welcomed the assembled community of donors and introduced SLA President, Dr. Paul Torrisi.  Torrisi noted that all had gathered for 2 reasons: to honor the man most responsible for promoting the conservation and preservation of Skaneateles Lake, Dr. Robert Werner. and to commission the boat in his name and memory to provide research efforts and educational/community outreach to all who live, work, and play here…along with hundreds of thousands in CNY who rely on this clear/pure body of water for its drinking and sustenance

Torrisi noted that two volunteer directors of the SLA needed to be recognized for their efforts.  He noted that Fran Rotunno Fish had initiated the idea of the boat being constructed in Bob’s memory; had raised the funding from the community and had obtained the many in-kind donations from community businesses that were also significant to our funding.  Dr. Torrisi noted that as the design and scientific requirements evolved during the early construction on the boat by John Menapace and his staff last year, it was volunteer Board member Bill Dean who jumped in to give so much of his time and expertise. He was able to complement John, Pete, and staff by researching the scientific needs of the boat through his position as Co-Chair of the SLA LET, from an operational, mechanical, and electrical perspective.  Bill worked days, weeks, months alongside John Menapace and his staff to finish the construction of this boat.

Torrisi noted that what was now in front of the gathering was a very soundly constructed tri-toon with a strong and easily maintained deck, hull, railings, and permanent “bimini” roof with solar panels energizing a complex series of lithium batteries, along with very sophisticated navigational, operational and scientific instrumentation and equipment.  It is a boat named in honor and memory of Werner, one that Werner would be very pleased to see, and what hopes to be a valuable asset to not only the SLA, but the entire watershed and CNY community for years to come…helping to keep this lake clear and pure, as it states in SLA’s mission statement and on our logo.

Fish shared the ease of the effort to raise the funding for the boat.  With assistance from Bob DeWitt and Steve White they had reached out to community members and not one of them refused assistance and many gave very generously for specific components of the boat.  She also noted the generosity and helpfulness of many area businesses was an important component of the funding for the boat.

With the gathering assembled on the shoreline and on the slips on each side of the boat, Bill and Bobbi Dean unveiled the boats signs naming it the “Dr. Robert Werner Research & Education Boat.”

Bill Dean gave the gathering an overview of the equipment of the boat and what it   could be used for.  He explained the complex lithium battery system, the solar energy source and the very special trolling motor with GPS that will hold the boat in position for those activities that have to be done in very specific locations.

SLA member and Bob’s friend and neighbor, Larry Weiss, provided some words of reflection for the day.  He noted that the boat was one of Werner’s living legacies and that it is a testament to three things.  It is a testament to how very seriously Werner took his responsibility as a steward of Creation. Werner prophetically both took action himself, and also called the whole community to action to protect this lake. That is the role of a prophet, to rouse the community to action.  It is a testament to the response of the community to Werner’s prophetic spirit of stewardship.  Finally, in ages past, a great prophet was commissioned by receiving the mantle of their predecessor. The Skaneateles Lake Association, the related organizations, and most of all, the individuals who responded and continue to respond to Bob’s prophetic guidance and leadership in preserving the life of this lake are receivers of Werner’s mantle. Lord willing, may we also receive a double portion of Werner’s spirit. This boat will carry it forward. 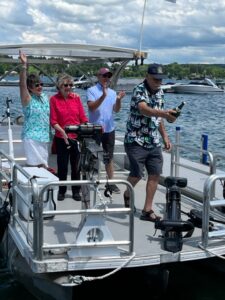 The SLA could not have completed the Dr. Robert Werner Research & Education Boat without the in-kind donations from members, vendors and Skaneateles community businesses.  Join us in extending a thank you to each of them.

John David Hammond who donated the pontoon boat, which was originally used in the Milfoil Project, and later provided the basic framework and two of the pontoons for “The Bob”; Dorothy Krause for the use of her trailer during the first summer of the boat’s construction; the Mercury Motor Company for a special non-profit organization price on the new Mercury motor; Pete Severson at Sevey’s Boatyard for facilitating and supporting our request to the Mercury Motor Company for the motor and for special pricing on accessories; the Skaneateles Sailboat Shop for special pricing on accessories and safety equipment; Brinson’s Marina for special pricing on the specific trailer we needed for the boat; Lakeview Auto and Marine for providing gratis, safe winter storage; and The Skaneateles Country Club which is providing a gratis mooring for “The Bob”.

You can help support the work of “The Bob” and all of the efforts of the Skaneateles Lake Association to keep Skaneateles Lake clear and its water pure by becoming an annual member of the SLA.  Join online at SkaneatelesLake.org or call Fran Rotunno Fish at 315-558-3142 for a Member Registration Form to be mailed to you.